According to one US psychologist specialising in the reasons why we eat what we do, around a third of the world’s population tuck into chilli peppers on a daily basis.

The conundrum is that those countries where hot, spicy food is a way of life also tend to find themselves in climates where even the roads sweat melted tarmac under the midday sun, from Mexico and Jamaica, through West Africa and the Middle East, to India, Thailand, Malaysia and so on. These are places where, if sanity prevailed, ice should form a significant part of the daily diet. Instead, the food ramps up the heat, like tossing another ladle of water onto the coals in a sauna. Clearly, there's something here to explore. Spice, the final frontier.

Hot Pepper Benefits
In fact, the answer is simple. Hot pepper, it turns out, is something of a superfood. It stimulates sweating, cooling you down. It clears the head and the sinuses. It speeds up the metabolism. It's even packed with antioxidants and vitamins. Most importantly, though, it adds a bit of vigour into dishes heavy with carbohydrates. If you’ve ever slogged your way through corn tortillas, fufu, or boiled plantain, you’ll know how welcome a dash of pepper sauce can be. Similarly, it also cuts through some of the fatty mouthfeel in meat, one of the reasons why it’s such a big deal in Southern US barbecue culture. And if we're going to be emotional about it, the searing pain from chilli helps release endorphins that produce an addictive high.

Hallelujah! If anywhere needed cheering up, it’s austerity's England. Luckily, chilli is increasingly in vogue here, and 10 years ago, the very epicentre of world spice was West Bexington near Dorchester, after a Dorset couple cultivated the world’s hottest chilli, the Dorset Naga which registered 923,000 units on the Scoville scale. Things will only get hotter.

Dorset's Own Chilli Emporium
Proof of just how hot chilli is right now was the opening in March 2015 of The Dorset Chilli Shop in Bournemouth. Run by Lisa and Andy Guy, the colourful store in Winton is an emporium dedicated entirely to chilli. The shelves are lined with 63 sauces, 33 jams and relishes, and a host of other snacks, rubs and powders, all of them promising a legal culinary high.


A little digging, and the motivation becomes clear. Not only are both Lisa and Andy passionate cooks, but each spent a formative period in a country where spicy food was the norm. In Andy’s case, a two-year stint in Singapore, a culinary crossroads of sambal, curry, South Asian influences. Lisa, on the other hand, lived for 12 years in Jamaica, where a single Scotch Bonnet pepper slipped into a goat curry or oxtail stew can make grown men weep.

The couple were initially inspired by Brighton’s chilli shops, went travelling, and returned with the idea of supplying Dorset and beyond.
“We’ve got one of the biggest Chilli Festivals in the country, but nowhere to continuously buy chilli unless it’s online,” Andy explains. “We have that street presence.”

Searing Ambition
Add to that a devotion to chilli. As well as stocking blends from UK producers, Dorset Chilli Shop produces 25 of its own products from a certified kitchen. These range from the blistering Antidote sauce with Carolina Reaper pepper to the fruity Dorset Knockers chilli raspberry dressing. In between are Dorset Fire, using Naga pepper, the Caribbean-style Dorset Sun with Scotch Bonnet, and the Thai-inspired Dorset Meadows.

The shop supplies the napalm-themed needs of many local food outlets. Websters butchers in Winton takes the winged hot sauce, Smoking Outlaw, The Sloop and GuavaVibe the Dorset Fire.

Both admit to being hooked on pepper. “Once you have chilli in your food, you have to continue,” warns Lisa. “Food is bland without it.”

It's Not About the Scoville Scale
That said, both are ambivalent about the perception of chilli as a benchmark for virility. Yes, the shop stocks sauces with names such as Doomsday, Slaughter, Crazy Bastard and simply The End, but chilli is no more about heat than good wine is about ABV.
“It shouldn’t take away the taste,” says Lisa. “If it’s taking away the taste and adding heat, then it’s too hot for you.”

A good hot pepper sauce should be fruity, aromatic, viscous and complex. The cheaper mass-produced brands tend towards thin and vinegary, whereas those with skulls on the label err on the side of apoplexy. Neither adds much to a dish.

Quality chilli brings out the flavour and depth in food, no more so perhaps than in Mexican cuisine where dried ancho, habanero and chipotle chillies are used to bring smokiness and finish to stews, with fresh jalapeno and serrano lending brighter zip to salsas. 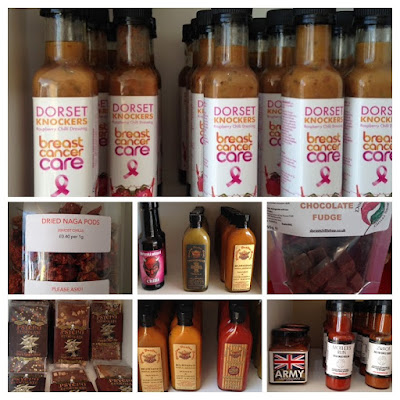 Fusion Chilli
You can see the commitment to chilli in the variety of spin-off products on sale. Samba relish to add some pizzazz to burgers, Bacon Jam with Chipotle for BBQ. Riffing on the delicious fusion of chilli and chocolate, there’s chocolate chilli and even fudge with homegrown Trinidad scorpion peppers. After all, Mexican food uses chilli in sweet dishes just as it uses chocolate in savoury. At the regular tasting evenings held by the shop, Lisa shows visitors how to bake chocolate cakes with chilli, as well as work in ideas on what to do with it in humus, Greek yoghurt, mayonnaise and even a rum with pineapple juice and Pestilence chilli syrup.

Personally, I've get to get higher up the Scoville Scale than the Scotch Bonnet pepper, partly because I'm spooked by Ghost Peppers and beyond, but mostly because howling over a curry no longer has the appeal it once did. If you've subjugated the Naga, Carolina Reaper or Trinidad Scorpion and come out unscathed, however, share your story below...