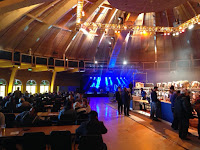 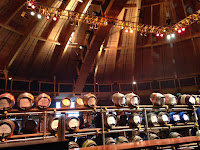 If the BBC got their hands on it, the third day of the Bournemouth Beer Festival would be branded People's Sunday. The day when the ticket booths are closed, the gates thrown open, and more than 200 traditional ales turned over to the attentions of the casual fans. Free at last.

As it is, Friday and Saturday's sunshine has given way to the kind of South Coast March tempest that only surfers can look at with excitement. By the time I clear security at the Purbeck Hall and buy my commemorative pint glass, I'm not really bothered about what lies in wait. As long as it isn't raining horizontally. This, I suppose, is real ale weather.

Hallowed Ground
Inside the hall, it turns out, is heaven. Or at least what the bar in heaven must look like. There's plenty of seating, live music on stage, snacks, and in the centre row upon row of cask ales. I'm expecting to find John Lennon and WG Grace bantering over a packet of pork scratchings, but instead discover a hushed auditorium paying sacred homage to beer.

Southbourne Ales immediately catches my attention, and I pick up a half of Sunbather that is wonderfully yeasty with a touch of Marmite. Then it’s my opportunity to browse the lines of casks. I’m a bit confused. Yes, there’s a program and most people seem to be consulting it religiously, but I’m lost where to start. In panic, I pick out an Old Mill Red Goose and retreat to a table to watch the band. A wise choice, it turns out.
Back to score some more tokens, then I go crazy with a Pink Grapefruit beer, which doesn’t really hit the spot, and neither should it. I finish off by returning to Southbourne Ales for a Grockles.

Keeping it Real
Admittedly, turning up on your own in an anorak to a real ale festival is hardly the stuff of Nike adverts, but once I’m settled at a table with a fruity beer in hand and the live music in my ears, I feel like George Clooney in Vegas. This is how beer drinking should be. In a vast hall, with plenty of space, no lines at the bar, no one preening or punching pulling. Take away the leather and you have Oktoberfest in Bournemouth. In March.

And let me dispel a myth. A beer festival is no longer a beard festival. I spot only two, and I think they might be hipsters, so that has to be a good thing. The crowd is young, lively, and out to enjoy real ale at leisure, rather than pounding shots in preparation for a fight and a kebab.

In fact, my only problem with beer festivals is that they require you to think about beer. That's like convening the UN Security Council and asking everyone to chillax. Instead, I totter out into the twilight with a couple more notches in my beer glass and the strengthened conviction to never settle for a branded lager in a pub if there's something local or regional on offer. These beers carry stories. There's tales in these ales.