Tracey Collins - owner of Ajar Of...


You will probably have come across the Ajar Of range at farmer’s markets and food fairs around Dorset, possibly even taking home a Jumbleberry Jam, Red Onion Marmalade, Mango Chutney or Tomato Ketchup. You might not guess, though, that each jar is prepared in open pans inside a converted cow barn on a small farm in Sturminster Newton, using produce from local farms, PYO or even foraging. Ajar Of founder Tracey Collins took time out from canning her latest batch to tell Dorset Gourmet the story so far…

How did Ajar Of come about?
We made the decision that we wanted to move down south. I gave up my job in London and while we were waiting to sell our house, I started making cakes at a cake stall in food markets in Beaconsfield, Bucks. Somebody asked me if I would do preserves and run a preserve stall. I said, ‘Go on then’. In 2011, I rocked up at Henley Farmer’s Market with 66 jars and went home with 13. And it started from there. I rang the council and said I wanted to do a food business. They told me to register with the EHO and sent out a lovely man who ate cake and drank tea in my kitchen and gave me the nod.

Did you have to refit your kitchen?
Because I was making what they consider a safe product that doesn’t involve dairy or meat then they were quite happy for me to do this out of my home kitchen. They are quite flexible as long as you show good practises.

Chutney is a little more demanding because they’re quite hot on botulism. It’s all about washing your vegetables and using the correct boards, so I have a fruit one and a vegetable one. 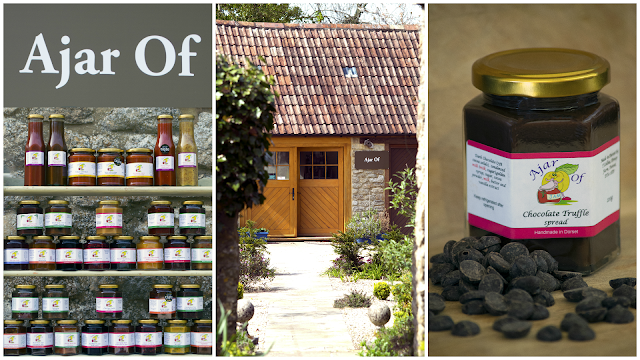 Where did you learn how to make chutneys and jams?
I always liked blueberry jam and I decided I was going to make my own. Then I did the same with piccalilli. I didn’t like the shop-bought version as they’d changed the recipe and made it sweeter. Actually, I found Delia’s recipe and made that. I used to give them away as presents and experiment.

How do you keep it consistent?
I have learnt from experience that when I’ve developed a product, I write down the various recipes as they develop. The final one goes in the recipe booklet.

You’re very active on social media. Where does that skill come from?
I was a business analyst in London so I’ve always been in computing. I also worked on the first ever Tesco internet site in the IT department. They developed a wine ordering service via floppy disks in the post.

Social media is an important side of the business. When I moved to Dorset, Twitter was my friend. It found me a lot of customers. When they see you out at events they have something afterwards to go back and look at. I’m much better at Tweeting than when I started. I try to keep it 80/20 mix: some of it’s about a new jam, some if it is just about my dog.

What the best advice you’ve received?
Keep It Simple Stupid. I probably have a range of 25 products but it changes with the seasons. When we come into the soft fruit season and everything is gorgeous and lush I might have a gooseberry or a strawberry on or blackcurrant. The most popular is the raspberry jam and the jumbleberry fruit mixture. The best-selling chutney is the dried fruit mix and the aubergine chutney.

What would be your advice to anyone setting out on a similar journey?
Do your market research. Don’t start anything until you know there’s a market there. It’s the biggest failing I’ve seen. When I started out I noticed everyone was doing fancy cakes, so I did traditional cakes. I have an accountant for a husband who liked eating cake but didn’t like the wastage figures. When I went into desserts in the Buckinghamshire markets, nobody was doing it. When I moved to Dorset, I discovered that everyone was doing it.

What do you enjoy most about Ajar Of?
Talking to my customers. I love the feedback. They taste something and engage with you, about how they’re going to use it or store it. I’ve always got different ideas of how to use products not just as a condiment but as an ingredient, like caramelised onion in your gravy.

What has been the biggest challenge?
Coming to Dorset and breaking into the food and drink scene down here. It took years. But I joined Dorset Food and Drink, a wonderful organisation, and they’ve been really helpful. We’re doing a calendar together in July with other female food producers.

What would represent success?
Now. I would say I am thoroughly enjoying what I do. But I am in the horns of a dilemma at the moment. If I get much bigger I’m going to have to find premises that aren’t at home. I’m not sure if I want to get any bigger and move to a unit. There aren’t that many in Dorset and to pay for it, you have to increase production dramatically and then you have to go into bigger production. Will that maintain the flavour and the quality and the fact that it’s an artisan product? When you start putting it into jam boiling machines, I’m not sure where the skill is.

If you have a story to tell, please get in touch through editor@dorsetgourmet.com, the Facebook page, or by leaving a comment below…