The first surprise of the day is to find that the line waiting to get into the Bournemouth Vegan Fair looks like something from an X Factor audition. Not just the numbers, but the fact that for the most part everyone looks animated, fashionable and ready for a challenge. Where are the cardigans, the tie-dye, the man buns? As it turns out, my personal knowledge of veganism up to here is based exclusively on a food truck at Glastonbury in 1993. It will be a day of enlightenment.

Inside, the Bournemouth Vegan Fair is a celebration not just of wholefoods but of a whole lifestyle. In among the tables loaded with gluten-free, vegan, organic produce there are stalls touting vegan footware, cosmetics, confectionary and beyond.

Three approaches seem to be in play. Ethical, environmental and health. Veganism celebrates food that is cruelty free, as harmless as possible to the environment, and beneficial to the health. There’s a wealth of information to back up claims at every step. In simple terms, it involves a 100% plant-based diet that cuts out meat, fish, dairy, and eggs. That sounds like a mountain to climb for someone partial to a pulled pork sandwich, but nobody tries to convince me that kale is the new bacon. In fact, the debate seems clearly to have moved on from justifying the vegan choice. It’s here, it’s increasingly popular, and the benefits speak for themselves.

A feast of facts
Currently about 6 percent of the UK population is vegan, with about half a million followers, but this has increased by three and a half times in just 10 years. As a country, we might not be threatening India, which is 40% vegan, but we’re getting there steadily, particularly among Millennials. A major contributory factor is that it’s no longer that hard to turn vegan, with even small supermarkets and restaurants showcasing meat-free, dairy-free and ethical produce.

But let’s be honest, no one who’s chowed down on a rack of ribs is going to spontaneously turn vegan, but given the right reasons, they might reconsider. The Vegan Fair makes the case pragmatically, without proselytising. At one extreme, there’s the opportunity to immerse yourself in the horrific surroundings of a factory pig farm, thanks to the iAnimal virtual reality experience at the Animal Equality stand. It would be patronising to assume that meat-eaters aren’t aware of the conditions animals are held in, but seeing the whole process from birth to slaughter adds the necessary perspective.

On a more passive level, there’s the chance to chow down on some objective fact. I come away with a backpack full of leaflets that make grim reading. Most broiler chickens are killed at 6 weeks, while male chicks are usually gassed after hatching. Dairy cows are usually slaughtered at 4-5 years old having been pushed to their physical limits, while pigs typically reach their slaughter weight in just 6 months. From raising livestock on farms, we’ve adopted an industrial model of warehousing them for the shortest possible time. It’s death without a life in between.

It's about Waste...
Then there’s the sheer waste, and this could be the clincher as things get worse. Half the world’s cereal harvest is for animal feed and 71.6% of UK land is used for agriculture. Globally, we’re running out of fresh water, but still we’re allocating an average of 180 litres per battery egg, 2,000 litres per litre of milk, and 11,000 litres just to produce a single quarter pounder. In fact, it takes around ten times as much water to yield a kilo of meat as it does wheat.

... and of course Taste
Ultimately, though, in these foodie times, it has to taste good. The trick is not to compare vegan food with meat any more than you would criticise an appetiser because it’s not dessert. There’s plenty to enjoy among the stalls filling out the BIC – vegan ‘sausage’ rolls from Oxford’s Bakery that are missing nothing; fresh exotic fruit; rich, earthy espresso from Orzo coffee; cakes and brownies from Liberty Cakes; even chocolates from Cocoafeliz – and this is just a fraction of what’s on offer. 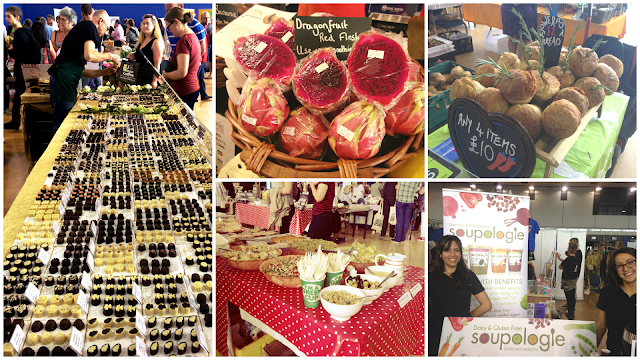 On top of it all, I had the chance to speak to Lizzi Shaw, the event organiser, who kindly took a few minutes away from the mayhem to unwittingly convert an omnivore…

How did we get here?
This is the third Bournemouth Vegan Fest. Every year I’ve double it in size and now we have 1,900 visitors today and 90 stallholders.  Stallholders this year have come from around the country as far as Derbyshire and Newcastle. You get the real producers who really care about it.

What is veganism?
Veganism is by no means just about a diet. We do tend to differentiate between people who live on a plant-based diet but don’t practise any other sides of veganism, to what you might call ethical vegans, which is more what all this is about, who literally instil the philosophy of doing as little harm as possible into every aspect of their daily lives.

Is it no longer about justifying yourself? Have we moved on?
I think a lot more people understand what a vegan is now. We are still a minority group but we’re particularly growing in the millennials group, partly because of social media and the access to information. What I want to do is to show people that it can be healthy and delicious and then let people make their minds up.

Is it possible to make the leap without committing fully?
I promote going vegan but there’s always a transition period. Being vegan should never feel like a chore. That way it becomes a way of life. It’s totally doable but the speed at which someone goes vegan is entirely up to you. The products are all there.

If you stop everything and start eating salad, you’ll get ill, feel rubbish and give up. You have to use the support that is out there. It’s an entirely healthy way to live, but that doesn’t mean it’s all just healthy food. There’s cake and cupcakes…

Every little change makes a big difference. And we need to make sure that people make informed decisions. We have to knock down those barriers. If you want to make those steps, we can help you do it.