One of the joys of this blog is finding out that a national or international phenomenon can be traced back to a source in Dorset. Then the pleasure of listening to someone wax lyrical about their product with genuine passion.

See what I mean with the UK’s #1 garlic farmer here.

Of course, we’re all selling something to some extent, but stories of celebrities stonewalling through interviews in monosyllables addressed through their PA show that we don’t all believe in what we’re selling. The latest person to share their story with Dorset Gourmet is David Walker of Dorset Snails.

Snails uncovered
Before I turned up at a nondescript industrial unit just outside Bournemouth, I knew nothing about snails. In fact, I’ll admit I thought they were adult slugs (they’re not). But I knew that something big was going on here. Dorset Snails is the UK’s leading supplier of fresh snails with a client list over the years that includes Gordon Ramsay, Marcus Wareing, Petrus, Claridge’s, The Connaught, Fortnum and Mason and a whole lot more. At one point or another, The Guardian, The Independent, the BBC, and the great and the good from Dorset’s publications have all made the same journey, albeit probably not with the same No. 13 bus from town.

Dorset Snails is a family affair. Just David and Jennie Walker, son Tony, and daughter Debi. Any one of them could pick up the phone at a moment’s notice and summon a variety of celebrity chefs, but for up to 12 hours a day they’re typically busy sorting, simmering, and extracting up to 12,000 snails a week from their shells in each other’s company with the radio on. 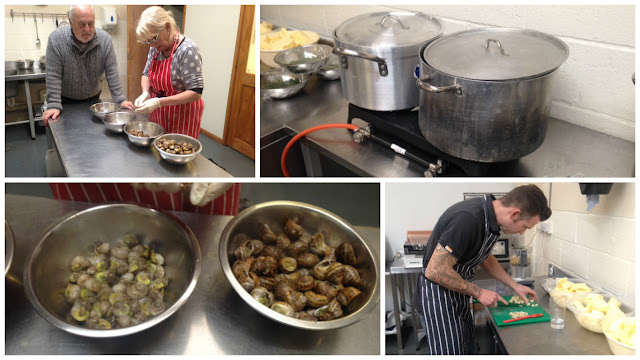 That’s the first shock. I didn’t even realise people in the UK even liked snails, but according to The Independent, we’ve gone from producing 30,000 in 2000 to 750,000 in 2014. It’s a figure that David disputes, not least because he’s producing nearly all of them. But there’s no disputing that snails are now a standard feature on epicurean menus.

A slow start
The Dorset Snail story started in 2006 when son Tony saw Gordon Ramsay visit a Devon snail farm on The F-Word. At the time, David was a retired sales manager with Philips and Siemens who bred worms in a shed to support his love of fishing. An idea hatched, and the family turned to heliculture.

The first step was to order a batch of Helix Maxima snails from Serbia, a country with an abundance of cheap land and ideal conditions for nurturing snails outdoors. It wasn’t an instant success. To be precise, the first batch died, but David was able to harvest the eggs. In total, it took two years of tweaking, coaxing and patience to establish a business. The snails are the same species as the common garden snail, but whereas the garden snail grows to about 10 grammes, Dorset Snails boosts theirs to about 12g with an intensive feeding regime.

Curious creatures
Starting from scratch doesn’t even tell half the story. David admits to never having eaten a single snail before starting out. Ten years later, and he’s something of a snail whisperer, reading their behaviour and monitoring their growth with the precision of a diamond cutter. Because snails don’t actually have a brain, there’s not exactly the opportunity for the farmer to develop a close bond. But while David admits that his farming doesn’t extend to affection, or giving names to his flock, he does concede, “They’re very clever things really. Quite a complex creature. They don’t communicate or wag their antenna if they’re happy. A happy snail is one that eats. But they react totally to their environment. They know what season it is. And they know the phases of the moon. On a full moon, your garden snails will be less active.”

Snails lay eggs in nests of about 100, usually underground or in leaf or rubbish, which they then seal with a plug. These hatch about three weeks later. The baby snails are fed on a protein-rich diet made up of 20 percent fine chalk for about 11 to 18 weeks before harvesting.

But banish all thoughts from your mind of herding snails into crates for a trip to the abattoir. Snails, it turns out, are capricious creatures. They like a soil temperature of about 10 degrees. Below that, they go into hibernation which can last for over a year. In fact, Dorset Snails keeps several thousand breeding snails ‘on ice’ (actually a fridge) as a back up. “Bring them out, get the temperature up to about 20 degrees, give them a spray of water and they’re awake,” says Dave. It’s not the only attribute they share with teenagers. Within a couple of hours, their thoughts turn to laying. “They’re actually very receptive to laying as soon as they’ve woken up because that’s what they do in the wild,” says Dave.

Raising the tempo
The secret to the Dorset Snails’ success is to keep the snails laying. “Our sort of farm is highly labour intensive because we’ve got the snails laying eggs 52 weeks a year. In the wild, or in open air farms, they only lay once a year then you have to find the eggs.”

Although snails are famously hermaphroditic in nature, they do inject ‘love darts’ to fertilize a mates’ eggs and boost fertility. These can then store for up to two years and used when the mood demands.

Snails, David reveals, also have a natural pecking order. “There are alpha snails,” he says. “It’s one of the reasons why if you overfill the system with too many snails, they won’t all grow. The bigger ones get to the food first and the others form a queue around it. You might put 100g of food with 100 snails, but they won’t all get their 1g.”

Worse still is tinned snails. “They’re packed in tins with brine and cooked for 20 minutes at 260 degrees,” he says. This is your typical French escargot, of which only 10 percent come from France. (The rest are cheap snails from Serbia, Eastern Europe, Poland and so on.) If you’ve had a bad snail experience, the chances are that this was the culprit. “There’s a few Italian restaurants I know that serve them out of the tin and they’re like snail chewing gum,” he laments. “They have no other taste other than garlic and parsley butter.” Instead, this is how you prepare snails that top restaurants will buy:

Purging
The idea of settling down to a sumptuous banquet of snails that were aimlessly wandering the garden path that morning is simply a pipe dream. For a start, those snails could have been chomping on poisonous plants such as foxglove, or bursting at the belly with grit and other impurities. It all has to be flushed out. To prepare them for the pot, snails need to go into a rigorous purging cycle – a week on just water to flush out the gunge. After this, they go into the fridge for a month to send them into hibernation.

Blanching
Rest assured, then, that every snail that goes into the pot at Dorset Snails is already deep in a blissful sleep. The snails are blanched in boiling water for a couple of minutes then deshelled and sold on to chefs to cook at leisure. Alternatively, blanched snails with butter are placed into a water bath at 96 degrees C and subjected to a ‘champagne simmer’ for 2 ½ hours, then rinsed in salt and vinegar to remove any slime. At this point, they are then slathered in garlic and butter and packed back into a shell. Not their shell, though. These would be too small, so Dorset Snails has to buy in bags of slightly larger shells for the purpose. The most astounding part is that there’s not a machine in sight. Just a row of stock pots and Jennie and company working through 12,000 snails a week by hand. On the day I visit, Jenny has an order of 1,000 snails to complete, working her fondue fork with ninja-like precision.

Packing
Once the snails are blanched, they bring them down to 5 degrees within 90 minutes then chill them to 1 degree, vacuum pack them, and send them out across the country by overnight carrier.

On my day at the processing plant, there’s an order being prepared for courier despatch to a very well known chef in London, and a 12-pack destined for the Isle of Wight by snail mail. Back at the beginning, the first big name to champion Dorset Snails was Anthony Worrall Thompson, David reveals.

“He was our first customer, and he had six or seven restaurants at the time. I went to his house with some sample snails, which were too big for the dishes he wanted to serve them in, so we had to harvest smaller snails. He had the Notting Grill in West London and I took up 55 packs on the Thursday in a van. On Saturday, he phoned to tell me that he’d run out.” 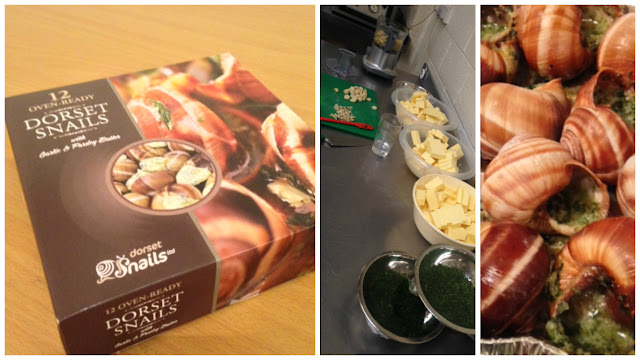 From snails to Escargots
The list of chefs who have run with the snails since – and the various approaches they’ve tried – is inspiring.

At Marco Pierre White’s steakhouse, the ribeye and fillet are doused in snails in garlic butter. At Temple & Sons, Jason Atherton does a Dorset snail bourgignon alongside clams. Our own Bridge House Hotel in Beaminster used to serve a very popular snail breakfast with mushroom, black pudding, bacon and fried bread. At The Tickled Pig in Wimborne, even the pizza came with a snail topping. You can even have them spicy. Cyrus Todiwala sold out with a snail curry tartlet based on a Goan monsoon season dish. One of David’s favourites is from Menu Gordon Jones in Bath where the snails are served as an amuse bouche in a light tempura batter, cooked for about six hours in a low oven.

Keeping up with the pace
Whatever the recipe, demand shows no sign of slowing down. “Overall, it’s been about a 40 percent increase year on year,” says David. “It’s not that we can’t keep up with demand, it’s that we never let anyone down. We’ve even driven up to Fortnum and Masons on a Saturday morning because they’ve run out.”

Aware that there’s a big order to fulfil and that David would probably talk about snails until the early hours if allowed, my last question is about the life of a snail farmer. It is, he reveals, a fairly pleasant existence. No dawn milking, no cold winter mornings. Instead, a satisfying and lucrative way to spend the days.

“I was a hotel owner at The Mayflower in Lymington,” he says. “Then I retired. We sold up in 1999 and mucked around a bit, did some fishing, then got a little bit bored.” Although the plan is to hand over the business one day to Tony, who at that moment is furiously whipping up garlic butter, it’s business as usual for now. “We have no plans at all to stop. I love it.”

Who wouldn’t? How many people get the opportunity to work side by side with their spouse and children in harmony? Well, almost. “I’ve learnt that if there’s a conflict about anything, I’m always wrong,” David concludes.

If you would like to comment on the above, add your own snail dish, or just get in touch, either leave a comment below or email editor@dorsetgourmet.com. And if you liked it, do please share it using the social media buttons below. Enjoy!