There’s a moment on the Great Western Railway diesel towards Maiden Newton, nearly two hours into a 40-mile journey, when I question why I’m doing this. Outside it’s May but grey, I should probably be using the weekend for something more enlightening, and aren’t food festivals just venison burgers and cider in a field anyway?

But I’m a sucker for three things: a double entendre, an eccentric English tradition, and warm cider with a venison burger in a field. Let history record that the BBC lost one viewer for the World Snooker Championship (and Tesco’s the sale of an economy lager four-pack) on Saturday, May 1, 2016. I had a knob-eating competition to attend. 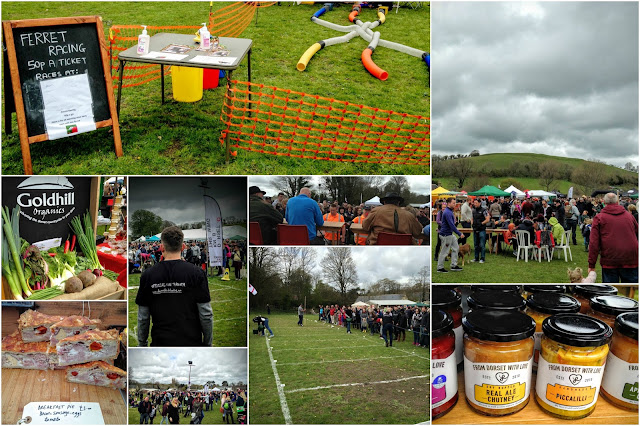 Cattistock’s Number One Festival
The festival – which is part of The Dorset and Frome Valley Food Festival – started in 2008 in the village of Cattistock. Organised by Nigel and Shelley Collins, the event raises money for the Cattistock Cricket club, Football Club, Playing Fields and Savill Hall. It’s fun, but above all it is a masterclass in marketing.

If you’re coming to the festival by public transport (and I feel as if I’m possibly the first to try this approach), you get off at Maiden Newton and find yourself in a quintessential West Dorset village – thatch roofs, hedgerows, undulating hills and top-of-the-range Range Rovers. The only hint that there’s a food festival in town is the 30-minute tailback of single-lane traffic that will eventually deposit some 5,000 visitors to the entrance gate by the end of the day.

Back to the marketing. This convoy of pilgrims would probably not be here if it were just a few food stalls and pop-up bars on offer. It needed something special, something quirky, something distinctive. And the fact is, less than ten years since its creation, the Dorset Knob Throwing Festival has become one of those events that define the county. In time, one of those events that overseas websites pick up as being part of the English fabric, like cheese rolling, Dwile flonking, swan upping, worm charming, bog snorkelling, and toe wrestling. Quite simply, this is still a country where you can lay down the challenge of tossing a knob, gobbling knobs, or putting the knob, and people will turn up to show their support.

Top Turnout
As it is, some 50 stallholders have made the early-morning journey to set up in time for the action, on top of live music. It’s well organised, convivial and easy to navigate. Enough people to make it worth everyone’s while, but not so many that there isn’t time to stop and chat with producers when the opportunity arises.

In a couple of hours, there’s time to…


Tell me Moore’s
In amongst this mayhem, there is of course the knob throwing. It’s both central and peripheral – there are knobs flying through the air and announcements for the next event over the tannoy, but you don’t have to be a devotee of the brittle, hard biscuits to get something out of the day. Instead, I grab a spot on a haystack and enjoy five minutes of Cattistock thrash metal, then a charming medley from a ukulele group. It’s like Glastonbury for foodies.

Unfortunately, because it’s Sunday and it’s Dorset, I have to get back all too quickly to the railway station if I stand any chance of getting out of Cattistock before winter. That means an hour spent on the bench in the waiting room gazing into space. It’s lonely and isolated, under the slightly menacing gaze of some local teenagers who seem to want me gone. There’s probably a joke to be made here about the role this waiting room has played in tossing many a Dorset knob, but this blog is not the place to make it.

It's been a great day, one worth sacrificing an afternoon in front of the snooker for. I'll be back next year. But for now, having ticked off the Knob Throwing Festival, I feel a little closer to Dorset.

As always, get in touch or post below with comments.