To Weymouth. The Farmers Market roars into St. Thomas Street on the fourth Friday of the month, so this was my opportunity to sample some local delights and also visit Weymouth for the first time. At least I think so.

Walking along the seafront from the station, the town seems both exotic and familiar. Did I come here on a school trip? Did I grow up here? I'm pretty sure the answer is no in either case, but ever since I crossed into my forties, my memories aren't so much shared as carved up and scattered into the wind. Rummaging through old boxes the other day, I found a ticket stub for an evening with Norman Mailer in 2002. Norman Mailer. And I have no idea if I went or not. If I can’t remember whether I sat feet away from Norman Mailer for an evening, what chance does Weymouth stand?

Curious George
Either way, whether it’s my debut visit, or part of an annual pilgrimage, it’s love at first sight. The first sun of the year is out, I can stand beneath the Victorian clock on the seafront and look across to the white cliffs of Purbeck, and the sight of a statue to George III in prime position reassures me that this is a town that knows who it is. If you’re erecting monuments to the man who arguably lost America, you must have one heck of a farmer’s market. Then again, if it wasn’t for George III, we’d be playing baseball and building walls between England and Scotland.


Market Nerves
And Weymouth does have a good farmer's market. Although nobody seems to have realised. Occupying a short strip on St. Thomas St., the market doesn’t match what I’d expected, which was elbowing out Saturday shoppers gawping at their smartphones. Instead, it's quiet. Too quiet.

Today, those that have braved the March sunshine include Dorset Shellfish, Hunny Bears, Bridge Farm Cider, Dorset Herbals, Lizzie Baking Bird, and Ali's Homemade produce. The silver lining is that I have the opportunity to stick around and interrogate the stall holders. To the man and woman, they are friendly, passionate about what they do and more than willing to indulge lines of questioning that would embarrass Alan Partridge.

In the same week that one of the big supermarkets was slapped on the wrist for inventing fictitious farms to label its foods, it’s hard not to question what it is exactly that people want. If the idea of farm-fresh, organic produce still strikes a chord, then there are options. They're called farms. I get a good idea in an no more than an hour of chatter of just how difficult it is to bring these items to the table. Something other than indifference at the end would be a start.

Dorset Herbals has a large pot of coconut chai on the go, which is delicious, and it's impossible not to be infused with admiration at the young owner Ross's knowledge and love for the noble leaf. Likewise, Nigel from Bridge Farm is a mine of information and manages to turn my passing reference to scrumpy into an impromptu lesson on branding. More of that at a later date. I also get the chance to discuss bees with Alex from Hunny Bears, a subject with few positives at the moment, but lift my spirits with a cone of honeycomb which turns out to be narcotic.

Park Life
The rest of the day passes in an idyllic blur. Market, a wander along the quay, crossing over the famous bridge, bathing in sunshine at Nothe Park looking out to what passes for the rest of the world, then a pint or two of real ale and the big papers in an empty pub all to myself. The sun streaming through the windows. Not a fruit machine in sight. Perfection.


My return wander through the town also leads me to an unexpected gem, the Chalbury store, which turns out to be a shrine to Dorset produce. They even have Moore's Dorset Knobs out of season. I spend half an hour lost in the shelves (not literally. It's quite straightforward) and am humbled by how helpful and enthusiastic the assistants are towards the end of a long day.

Weymouth Matters
I'm looking forward to heading back to Weymouth. In fact, I can't understand how I don't know more about it. Then again, like so many south coast towns, there’s a jarring mix of beautiful and hideous. I can’t imagine a French Riviera town, for example, choosing the Promenade as the place to position the recycling bins and the Ladies.

There’s a strip of desperate but colourful guest houses where silent couples are grudgingly working their way through cream teas outside, as if al fresco dining were part of an initiation ritual for Dignitas. There’s a sign for 'Weymouth’s Only Nightclub', an interesting sales pitch that doesn’t hint at an experience up there with the 90s Hacienda. I’m assuming Wednesday night is 18-64's only.


There’s a display paying homage to Weymouth’s prominent role as a sailing venue for the 2012 Olympic games, Super Sunday, Ben Ainslie and so on. But from the look of the people deep-throating April ice creams on either side, I wouldn’t mind betting that the 2012 games are still a recurring feature of daily conversation. Some are possibly still waiting for the results.

But I didn't come here to look for things that are done differently. I took the train to visit a farmer's market and am glad that I did. 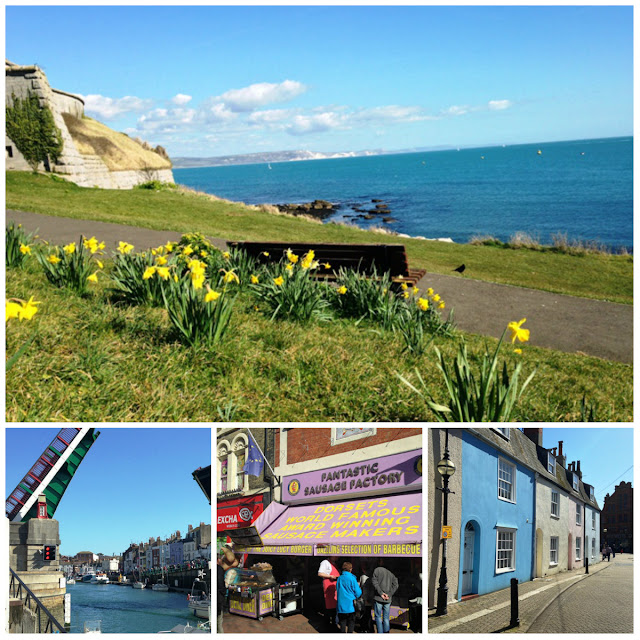 If you'd like to get in touch with Dorset Gourmet, please email editor@dorsetgourmet.com