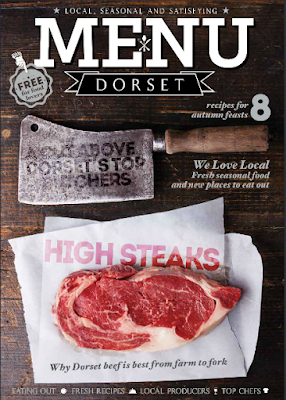 For the cover feature of the October issue of Menu Dorset magazine, I interviewed some of our leading beef farmers and butchers. I gained an interesting insight into everything that leads up to the steak on your plate or the burger on the grill. You can read that article here, beautifully designed and with some outstanding photography. In the following post, I’ve developed some of the thoughts that got me ruminating…

What’s the beef with beef?
Beef accounts for 12% of UK agriculture, but the industry is facing some of its hardest challenges yet. A quick stat attack: 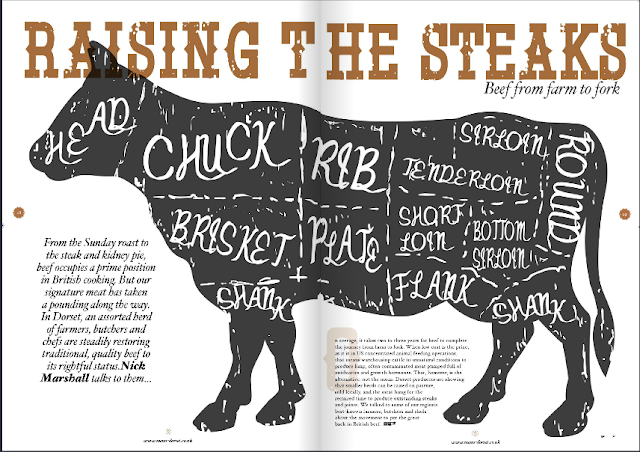 How does beef work?
Typically, it takes about 2 to 3 years for UK beef to go from farm to fork. In the US, 18 months is standard, and keeping cattle any longer is seen as wasteful and counter-productive. From selecting the right semen to measuring the exact amount of required feed, industrial beef farming eliminates the unknown.

Luckily, we’ve largely avoided going down the route of the Concentrated Animal Feeding Operation in the UK, but as long as consumers demand cheaper meat, we’re implicitly allowing the major retailers to make the case.

The free range alternative
So it’s encouraging to see a number of beef farmers and producers in Dorset doing the opposite. Drive anywhere in the county and you’ll come across rolling valleys of pasture, these days with the obligatory yurt or tepee encampment often as a final flourish. It’s land that cries out for dairy or beef farming, the quirkier the better.

What’s in a label?
To be labelled Organic, the farm must be certified by the Soil Association and the cattle raised free from antibiotics, pesticides, and fertilisers. This is the kind of beef you’ll get from Cedar Organic Farm on the Isle of Purbeck.

Otherwise, you’ll want to look out for grass-fed or free range beef, which is raised on pasture rather than grains, or which comes with the Red Tractor Assurance.

Martin Bartlett and family have been farming at East Shivinghamtpon for 70+ years. When the dairy herd was sold in 2009, the farm moved onto a suckler beef herd of around 300 animals. These are Limousin, Hereford and Aberdeen Angus.
“We’re trying to do it in a very traditional way – they graze in the summer and come in the sheds eating silage in the winter,” says Martin. “You’re giving that cow as good a life as possible to grow without stress. That makes the beef better.” 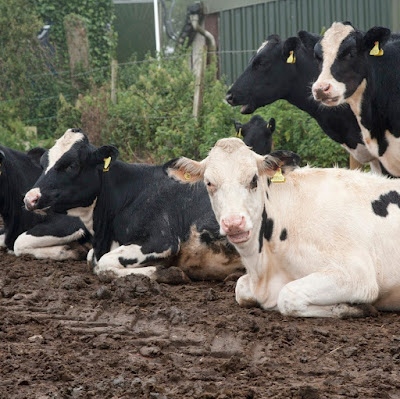 When the time comes to despatch cattle, the shortest journey to the abattoir is better, since the animals suffer significant stress en route. “The slaughterhouse is down in Bridport,” says Martin. “It goes from us to an abattoir and then from a butcher back to us.”

This is a farm that thinks locally and follows sound practise. “We don’t waste any of our meat. We only send on an animal to slaughter when we need more meat. We don’t want to fill up the freezers with things that we already have,” says Martin. “Food is too cheap generally. That means that farms struggle. If people buy local produce they can help their local environment and economy. I’m a huge believer in the local tag for food.

Patricia Barker raises Dorset Longhorn at the Bride Valley Farm in Abbotsbury. They’re a three-time Taste of the West Gold winner.
“We’re the only farm that I know of that turn Longhorn cattle into beef,” she says. “We buy them as weaned calves then we rear them and send them to the abattoir at 2 ½ to 3 years. We send about one every week. We have between 150 and 200 of all ages.”
The cattle are grass fed on permanent pasture. “They have a very natural life, spending most of their time on a nature reserve called the Valley of Stones. They’re not in small paddocks or strip grazing. They have the freedom to roam across a big area. Because they’re good grazers they will pull out the less palatable grasses.”

In order to remain sustainable, the farm insists that the restaurants and pubs it supplies do more than just cherry-pick the choice cuts. “Hotels and restaurants tend to want prime cuts from the hind quarter. If I sell only that what am I going to do with the other two thirds of the animal from the fore quarter. So every time I take someone on, I have to spell it out to them that they have got to take some of the rest,” she says.

Often, that will mean educating those who visit the farm shop on what they can do with different cuts. “Things like short ribs have become very fashionable recently. It used to be that people didn’t know what to do with them. People come into the shop and ask us how to cook different cuts and that’s one way of educating them. You show them where it comes from and how to cook it.”

RJ Balson & Son, in Bridport lays claim to being the world’s oldest butcher, having started out in 1515. Running a business for five centuries isn’t just a case of finding your niche – it’s about providing something that’s better than what’s on offer elsewhere.
“Most supermarket meat it goes in the slaughterhouse live and it comes out the other end in a tray all wrapped up in plastic. Although it looks nice and bright, people don’t know what they’re missing,” says Richard Balson.

“The main thing with beef is that local is better. And it’s how you keep it. It’s the hanging that’s important. You don’t want it too fresh. You want to hang it for about 3 weeks. As the muscle begins to break down it goes darker and will be more tender.”

People not only want meat that looks aesthetically pleasing, they also want to cook it quicker. Another challenge.
“People want a small joint that they can carve quick and use it up in one go. If you go back 50 years, it was a bigger joint that lasts all week and you had it roasted on a Sunday, cold on a Monday, minced on a Tuesday or stewed and that joint lasted a whole week. Now they want something that they can cook in 20 minutes. Things have changed so much. People don’t have the time and we’re all out working, so they don’t have 4 hours to prepare a meal,” says Richard.

Barbara Cossins runs The Langton Arms in Tarrant Monkton. The family has been rearing cattle for five generations. One of the main advantages of buying local Dorset beef, she says, is that “the consumer is guaranteed 100% traceability as well as 100% British beef and not horse meat, for example. Every Red Tractor assured farm is routinely visited and rigorously tested to ensure that they are achieving high standards of animal welfare, hygiene and general farm practice.”

Says Barbara: “All of our animals are born and reared on the farm and therefore lead stress-free lives. The only time they leave is for the abattoir that is a short 10-mile drive away. Our system is extensive and so all our cattle spend most of their time grazing on the pasture rich Dorset downland that is superb for growing healthy animals. We also utilise our own homegrown feeds rather than relying on imported feeds, and so we run a completely self-sufficient system.”

One of the biggest challenges she identifies is staying competitive: “This often means narrowing our margins. It is tough to compete with cheap imported beef, the majority of which has been intensively reared on barley with high stocking rates. It has also often had hormonal treatment to stimulate rapid growth in the animals, all of which results in a significantly cheaper production system than our own.

Looking to the future, there is much uncertainty for farmers who are soon going to be running their businesses outside of the EU. But if there is enough support from the British public then farmers will hopefully be able to succeed in sustaining the future of British agriculture and carry on providing quality food with a mindfulness for the local environment and high animal welfare standards.”

Conclusions to be drawn
Quite simply, there’s an enormous difference between a 21-day aged steak from a butcher and a bright pink cut from a supermarket, and the latter is not necessarily cheaper. But it needs people to get back to their local butcher. That means butchers also need to work harder to stimulate interest and educate. The Langton Arms, for example, produces its own booklet explaining how to cook different cuts of meat.

We’ve lost a lot of skills where cooking beef is concerned. We’ve also lost contact with where our beef comes from, something that is changing in Dorset. Nowadays you can visit, camp out at, or even lend a hand on quite a few of our farms. As the saying goes, it’s time to sell the sizzle not the steak.