The Dorset Garlic Farmer Taking the UK by Storm

The morning I call Mark Botwright on his mobile phone, he is standing in a garlic field in Dorset. It is a field he has come to dominate as the UK’s #1 garlic farmer. Along the way, his garlic has won plaudits from Nigella Lawson, Hugh Fearnley Whittingstall, Yotam Ottolenghi, Michel Roux, Mark Hix and others, and he’s won Great Taste awards for the last four years. To be honest, I’m a bit surprised that the man who’s been on the BBC, US and Canadian TV and in all the papers has spared the time for a nascent local food blog, but it soon becomes clear. This farmer loves talking about garlic.


How South West Garlic began
The story of how South West Garlic Farm started is now the stuff of legend. Mark’s wife, Wendy, gave him three garlic cloves as a gift when his main business was livestock farming. 19 years later, and the farm is now growing 90,000 elephant garlic bulbs on 10 acres near Bridport. Along the way, it’s become an obsession, and the farm close to being the leading producer in Europe.

If Hollywood were to turn his story into a movie, there would be a great montage sequence of planting and picking garlic, cut with shots of standing out in the Dorset drizzle. All the ingredients are there for an uplifting feelgood blockbuster.

For a start, it’s a story of triumph over adversity. Prior to turning his hand to garlic, Mark was a livestock farmer with 600 head of sheep. “I’ve always been in farming, so there’s never been any money involved or the money to buy anything,” he jokes. Then Mark injured his back, and foot and mouth looked set to deliver the final blow. But Mark had plans for the 100 or so bulbs he’d been growing on the farm at that point.

A change of focus
So a livestock farmer became Mark the Garlic. Almost two decades later, the animals he does keep on the farm are for providing fertiliser. “We’re trying to become bio dynamic,” he says, “so that everything has a job to do. The cattle are here to produce meat, but also to produce top quality manure. The whole process has now gone full circle.”

In many ways, his success has taken him by surprise. “For 16 years, all I did was grow garlic to produce seeds to keep going forward,” he explains. “But about five years ago, I knew that by 2016 I would be holding probably the largest seed stock of elephant garlic in the world. In two years’ time, we’ll be at our peak. We’ll be producing two million bulbs of elephant garlic.”

A global phenomenon
That means that every day Mark is fielding calls from all over the world, as well as appearing on TV. “The other day there was a lady who’d been writing a paper just about garlic for five years,” he says. I suspect he gives anyone who does call as much time as they need, whether it’s to give advice on storage and growing, or recipes.

“Garlic is easy to grow but I get emails every day from people asking me why they can’t grow it. It’s incredibly hardy and I think people mess around with it too much,” he explains.

The Black Garlic revolution
Any dreams of a quiet life were crushed when Mark ‘discovered’ black garlic. It’s been a sensation.
“I needed to find a way of having product to sell in the winter when times are harder and we’d sold out of summer stock,” he says. 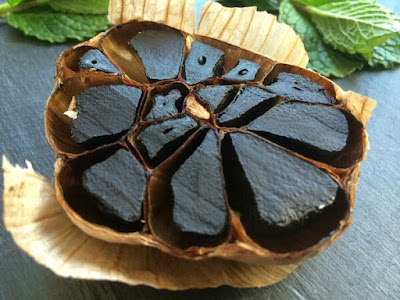 “That’s when I found the 4,000 year old recipe for the black garlic. We were looking for a way to preserve the garlic without adding anything to it and we don’t do any refrigeration. It’s as natural as possible. I found this recipe online and it took me three and a half years to perfect it. It was designed for putting garlic in earthernware pots and leaving them out in the sunshine. That doesn’t really work in the UK.”

Found most commonly in Korean cuisine, black garlic uses fermentation to preserve the garlic head. It’s been called the ‘new truffles’ with a taste that is not really that garlicky, but sweet, earthy and tangy.

“I took it around to lots of festivals and they thought it was amazing. Chefs had no idea what it was. They all thought it was garlic in balsamic vinegar,” he says.

Next up is garlic sea salt. “We harvested a lot of wild garlic in the spring and made the product,” he says. “We gave it six to eight months to see how we performs, and now have 200 kilos to start selling next week [late November].”
The wonderful world of garlic
At the moment, South West Garlic farm grows Garlic Scapes, Elephant, Morado and Iberian Fresh Garlic. Scapes are the long, thin stalks of the garlic flower with a peppery flavour and texture like asparagus.

“They’re incredibly popular,” Mark says. “We have to grow six times more garlic each year just to keep up with demand. But the window for the whole crop is just four weeks and they only produce one scape per plant.”

“We’re trying to steer away from the Mediterranean varieties which are the Morado and the Iberian. They’re very fussy soft neck varieties. We’re going now for more hardnecks. Russian-style Elephant garlic which love the cold weather. They just seem to do better. I prefer them. They look nicer and they have more flavour because they’ve been in the ground longer.”

Ah, yes. The flavour. I ask Mark why it is that the garlic I buy from the supermarket has almost no perceptible flavour or aroma.

Getting garlic wrong
“We don’t supply supermarkets,” he points out. “The reason the garlic you’re having is bad is because it’s probably spent 9 to 10 months in a chiller fridge with inert gases, and it’s lost its way.”

Most of the garlic that finds its way onto our shelves is from China. “There’s two papers been written about growing practises in China because they use human waste as a fertilizer and we don’t know how treated that waste has been. A lot of UK farmers apply human waste but it’s so well treated you might think it’s mud. But that’s generally put on fields where wheat or barley is grown for animal feed.

“They were also caught bleaching some of their white varieties. Garlic can get staining on the skin from different soil types, like a heavy clay. They were bleaching them because people prefer nice clear looking stuff. We’ve been brainwashed.” Aesthetic appeal is also the reason why bulbs are sold without a root. “It’s so mechanically processed,” says Mark. “That’s just what they do with chopping the roots off, to prettify it.”

Planting the seed
While Mark’s wife Wendy can take credit for sowing the seeds of an idea, I’m still curious to know what drives the garlic farmer. “I like growing things,” he says. “I love keeping animals and being in the outdoors. I’m standing in a field right now. It’s freezing but I’d rather be out here than indoors. But I’m inspired by my grandfather. I’m 53 now and I was messing around in his garden from when I was about three. I was always fascinated. He was an incredibly good vegetable grower.”

He also adds a poignant coda to his story. “I lost my parents when I was 21 and they’re definitely up there watching. Any time I plant something in the ground, the next day it always rains.”

Spreading the word
Like many other people I’m sure, I first came across Mark the Garlic by following his prodigious Twitter output and following the links to his website. Even garlic growers need to master social media.
“I’m completely self-taught,” he says. “You’ve just got to keep banging away. I never think ‘why am I doing this?’ We’ve got about 11,000 followers. I link to other stories to educate people and make them aware of what’s going on, and share recipes. I speak to a lot of people about black garlic and I’d say 99.9% of people have never heard of it so I’ve got a long, long way to go. I get people contacting me from all over the world wanting to talk to me about it.”

Once I’ve come to the end of my questions, I let Mark get back to keeping the crows off his garlic. I wouldn’t mind betting that he’ll hardly make a few steps before his phone rings again, with another list of questions at the other end of the line. And I’m just as sure that he would answer them all with the same enthusiasm.

If you’d like to leave a comment or share a garlic tip, please do so below. Or if you’ve got a story to tell, get in touch on editor@dorsetgourmet.com